I'd like to introduce you a cross-platform and every fast FASTA/Q toolkit, Seqkit, written in Golang.

Common manipulations of FASTA/Q file include converting, searching, filtering, deduplication, splitting, shuffling, and sampling. Existing tools only implement some of these manipulations, and not particularly efficiently, and some are only available for certain operating systems. Furthermore, the complicated installation process of required packages and running environments can render these programs less user friendly.

SeqKit provides executable binary files for all major operating systems, including Windows, Linux, and Mac OS X, and can be directly used without any dependencies or pre-configurations. SeqKit demonstrates competitive performance in execution time and memory usage compared to similar tools. The efficiency and usability of SeqKit enable researchers to rapidly accomplish common FASTA/Q file manipulations.

I had used SeqKit to solved some problems raised by Biostars users in simple and efficient ways. For examples: 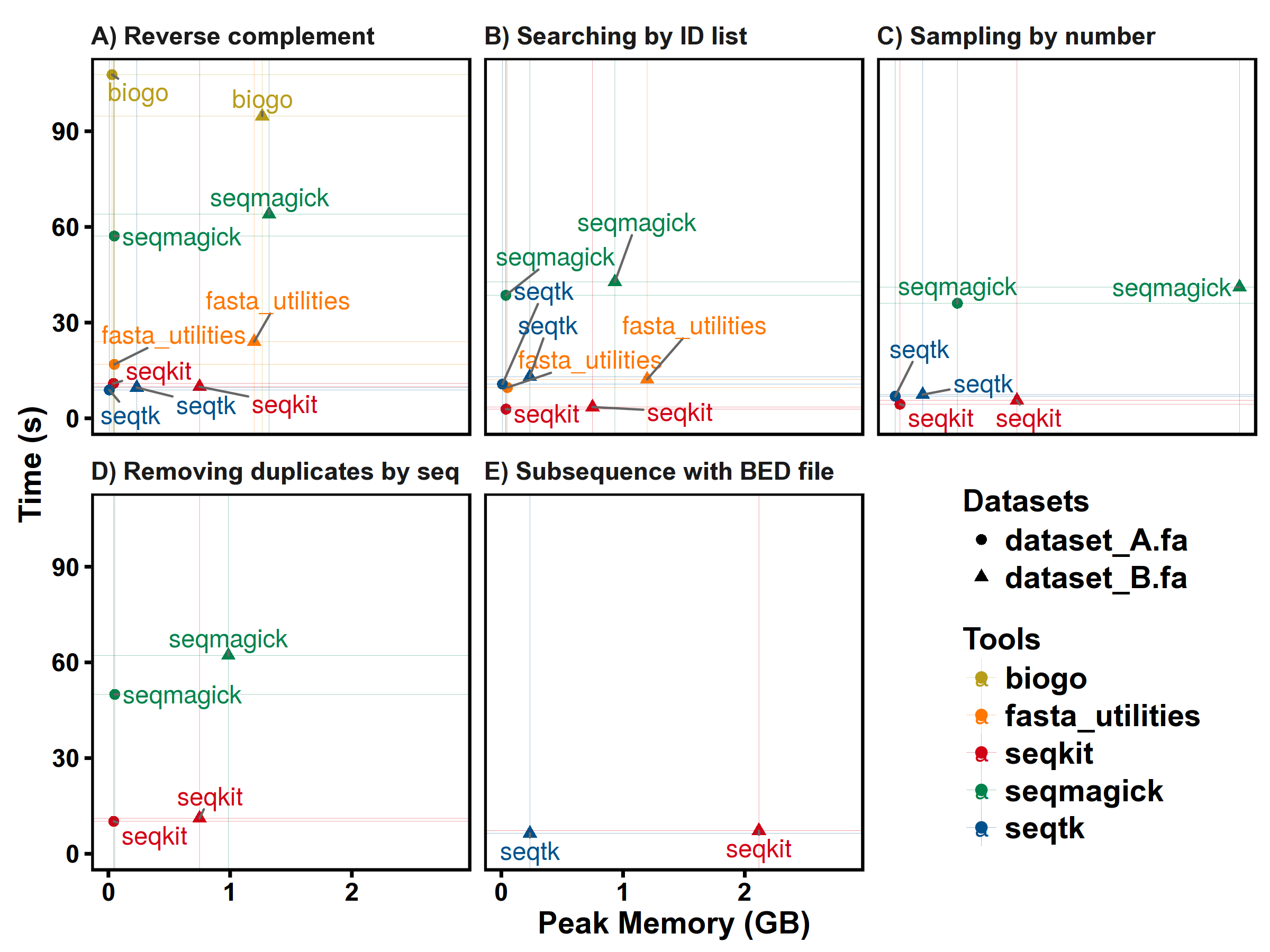 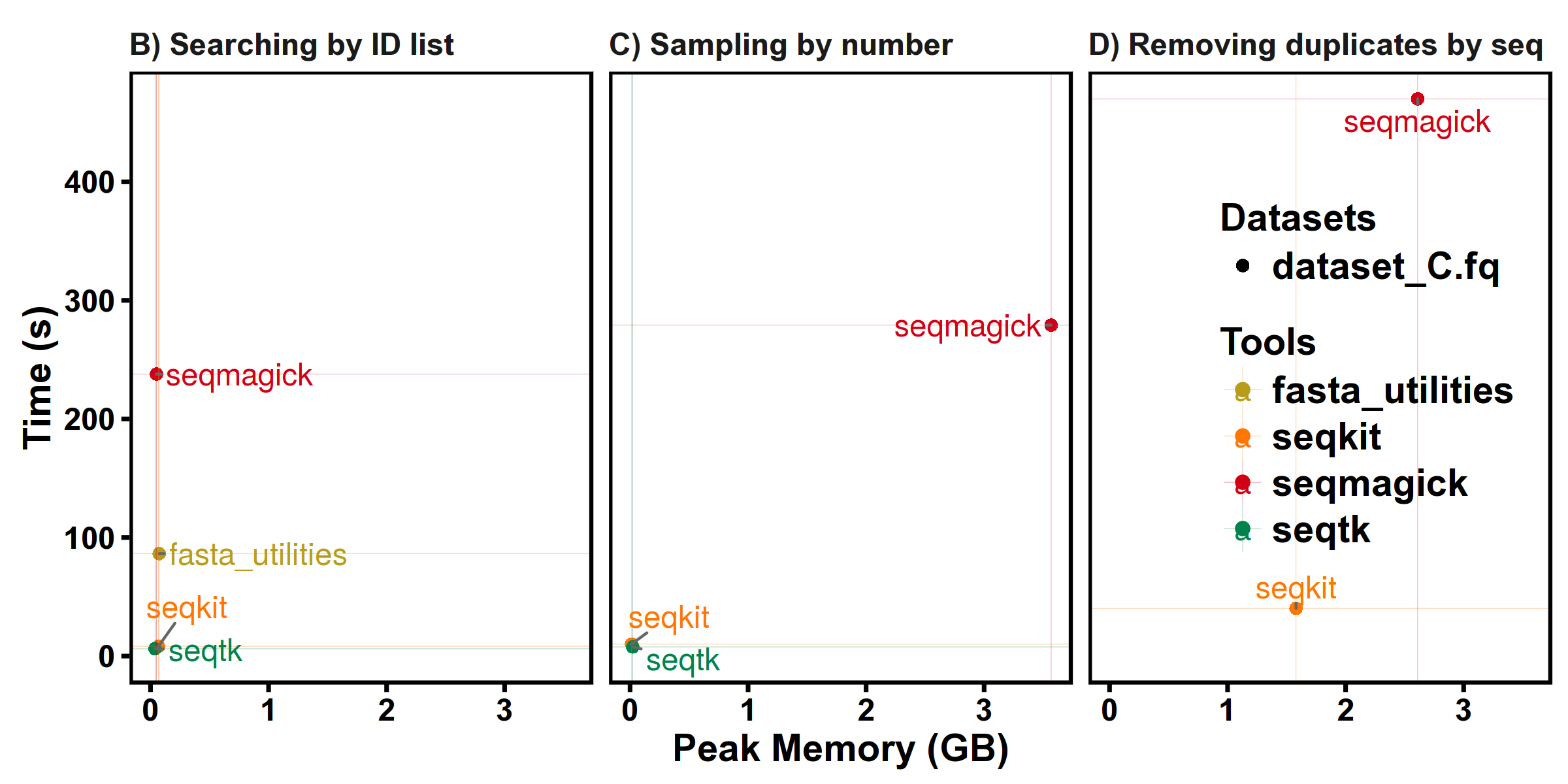 I just used seqkit to make a shell wrapper to take fasta length distribution that I wanted to share in order to let you know that how useful this (seqkit) could be.

Ofcourse, there is scope for improvement and can be modified according to requirements. For me, that was required!

Thank you my friend Wei

How about outputting sequence lengths and ploting using other tools I am trying to extract sequences from a gzipped fastq file(17GB) using sequence ID list in a text file (2.8GB) using the following:

However, the resulting subset.fastq.gz file is empty. Could you please tell how to deal with such huge files? Or is the command is incorrect in the first place?

you need remove the leading symbol @ by

Hello, I am trying to transform some fastq.gz files to their reverse complement, but when I run the command

Reposting because I accidentally posted as a reply: I am trying to transform some fastq.gz files to their reverse complement, but when I run the command

Can you try running seqkit seq -rp hairpin.fastq.gz > rev_comp.fastq? You should provide program options before input and output files. I just tested this out and encountered no fastq corruption.

You can also use reformat.sh from BBMap suite to do this.

I've only tested it briefly, specifically just the stat module, but it seems to give odd results.

The FASTA format is really awful so I do not blame you - however, if anyone should get parsing FASTA right it's tools like this :) I've had big problems trying to linearize FASTA files with comments in the past, so this is something i'd be interested in seeing fixed :)

In terms of the User Interface you've created, I think it's the best i've seen so far - for ordered and logical! Great job!

Thanks for your comments John,

1) Ah, so that is the linearize function. Very cool :) Particularly since your binaries have no dependencies. I think i will use this a lot.

You never see comments in anything produced by a NGS machine, but using comments used to be quite popular back in my old lab when FASTA was used to store SNPs. Comments stored the reference base (or variant) using the format above, but I guess VCF put an end to all that. Still, it was frustrating as hell to parse properly, which is why toolkits like this would have been so useful back when I had to do that.

3) Yes '>' is the most common format, and honestly should be the only format, however I have seen plenty of FASTA files over the years with ";" :( I thought maybe it would be a simple thing to add to your parser module.

Two more points: I just tried using "seq --validate-seq" on some strings with strange characters, but it didn't seem to do anything? I was expecting a sort of 'PASS/FAIL' type output. Second thing, and this just a request and maybe I should have put it on the github page, but it would be nice if the stat module could count the occurences of each character seen in the sequence, for example:

This would help people know if there are any characters that shouldn't be in the sequence that could cause problems later on, for example the 'F' above. Or maybe you just look for odd characters in --validate-seq and it prints out the line number the odd characters are on? That would be one small feature i'd really appreciate, and maybe others would too..? I dont know.

Best answer I could have possibly got - great work Wei! Thank you so much :)

Hey Wei, i’m really sorry, I re-read the FASTA documentation today and i’m just flat out wrong about “;” being an alternative to “>”. I don't know where I got it into my head that ";" was an alternative to ">", probably Wikipedia. It’s actually only the very first line of the FASTA file, containing a header, than can start with “;”. From my reading of the docs, you can’t even have a header for each sequence entry, it’s literally just 1 per file.

Really sorry for the lost time. If you send me a paypal link or similar i’ll buy you a beer.

Don't worry, I haven't changed the code yet.

Collecting all the previous answer and giving information for somebody starting from scratch. This plot is for doing a read length distribution if you have a fasta file.

2) Then type next command (replace file.fasta with your fasta file)

3) Then see your graph in hist.png