Given below table I would like to determine which SNP(s), that are near a specific region have the most influence on this region's DNA methylation. My idea was to define a glm like this:

with: Independent categorial variables: SNP1, SNP2 ... Dependent continuous variable: meth%. In the simplified example below SNP3 would be most influential on methylation.

I would really appreciate any help and thoughts on that! Thank you.

Is there any particular reason or hypothesis suggesting that SNPs' effects on DNA methylation are local? I would guess methylation status in a region could well be influenced by variants very far away?

That is true, Vitis.

Seems like a very interesting project. I would do the following:

In part 2, when I say 'test each independently', I mean:

In part 3, if SNP2, SNP3, SNP8, and SNP9 were your statistically significant SNPs, then the final model would be:

Regarding your SNP encoding, you can have these as:

Regarding your outcome, you can equally encode this as continuous or categorical.

Instead of glm, you could also do lasso-penalised regression. You can also build multiple models in various ways and then compare them, as I do here: I go over more on these things here:

There's a lot of other material on Biostars and elsewhere, too.

Thank you for sharing that information.

In that plot, it looks like the linear model (which I believe you expect to comparable to the glm() generalized linear model in this discussion) is similar (if not slightly better) than the more complicated model.

In general, I think this is interesting because I believe using more complicated models can often decrease validation / reproducibility in other experiments (although it is certainly necessary in some cases), but I don't think there is a severe issue with over-fitting in this situation (with the possible exception of the ridge regression).

Hey Charles, good to see you again. Yes, simplicity is best it seems, for building these models at least. I don't ever recall a situation where a Random Forest, 'deep neural network', or other machine learning classifier actually beat a simple lm or glm fit. I have been skeptical about the lasso regression for a while, too.

To give an update on this question (might be interesting for others as well): I was super happy with the suggestions you made and also used that glm to generate some results using the following input: The last two columns represent predictor and response variable respectively. With a glm in R defined as glm(data,meth~SNP's,family = gaussian)

And using Kruskal Wallis test in a boxplot one can really see the change in Methylation altered by different alleles: However then some colleague pointed out that the response variable (Methylation) might not be normally distributed. And in fact it is not: 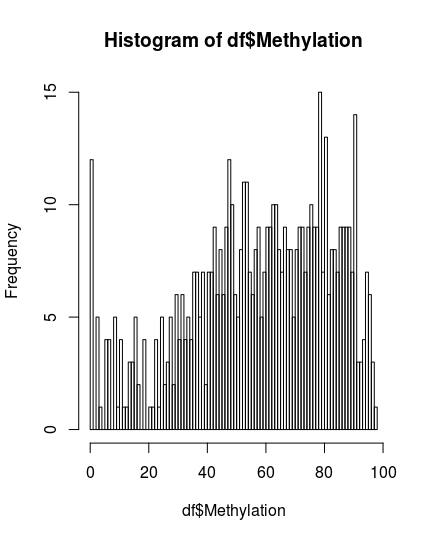 Which I confimed by qqplot (not shown). It doesnt look like any of the usual distributions (Poisson, gamma etc)

Does anyone have experience in that matter? Thanks a lot!

Hey, yes, you should check the residuals from the model. The default for glm() is gaussian, as you know.

So that basically tells me that the model is still valid. Thank you very much for your input!

Okay - cool. You may want to read a bit on the Shapiro Wilk test, though. I have heard that it is unreliable in certain situations. There is a lengthy debate on CrossValidated (StackExchange) somewhere