I know at one point they had a very high error rate, which they advertise as being much lower now. I'm looking for a recent paper from an unbiased source that has tested what the error rate is in a real world process.

I have emailed the company repeatedly but they have not provided any information other than a link to the order page.

Thanks for any advice.

Do you have a reference available for organism you are working with?

No, sadly there is no reference genome available. This would be for de novo assembly.

As part of HGSVC one sample was sequenced with Oxford Nanopore (~1.5 years ago). You can browse the QC information of that sample here, just select "DNA-Seq, Oxford Nanopore" from the set of reference data sets. The "Summary stats" tab lists the error rates of this data set for mismatches, insertions, and deletions computed using Alfred. The combined error rate was ~12%.

a recent paper from an unbiased source

Well, I'm not sure if I fit those requirements, but the quality score distribution of a sample of our human MinION and PromethION data, sequenced a year ago and base called a couple of months ago looks like this: 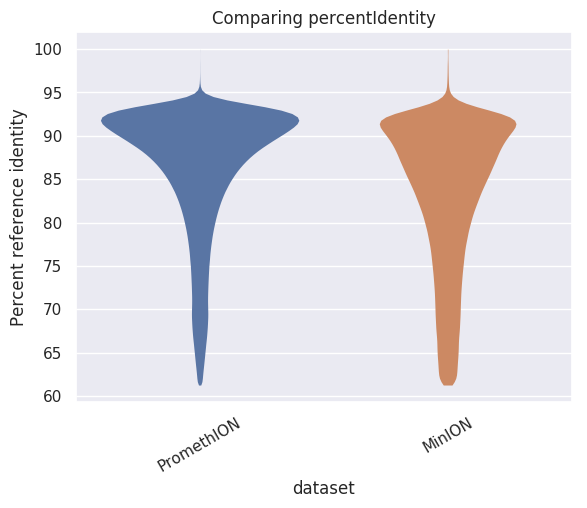 Thank you WouterDeCoster for posting this image.

Wouter's answer is probably your best bet for a published manuscript, but I thought I'd add my 2c from our unpublished internal data.

We were using MinIONs until about a year ago, and are currently primarily using a PromethION. We've been using the R9 chemistry exclusively at this stage.

We assess base accuracy by aligning the "control strand" which ONT provides as a spike-in. This is a 4.5Kb fragment of lambda bacteriophage, which has a very controlled and known reference sequence. We align all passed reads from each run to the lambda genome, and assess the base error using Qualimap. This is quantified as the edit distance between the reference and the reads aligning to it, divided by the total bases in the reads.

The last MinION runs we did around the first quarter of 2019 were getting base error in the region of 6-7%. This was using the "high-accuracy" mode of the guppy basecaller.

All of the PromethION runs we've done have somewhat higher error rates, usually in the 7.5-13% range. This seems to vary from flowcell to flowcell -- we've seen it range from 7.7-11.5% on the same library run on a series of flowcells with nearly-consecutive serial numbers.

That all said, we've found the PromethION data to be quite usable for structural variant calling. Wouter's paper goes into some detail on that. We've also found that it gives good de novo assemblies (approaching Q30 for a human genome from a single PromethION flowcell). We've also found that it gives DNA methylation results that strongly correlate (R^2>0.9) with Infinium array and WGBS. So while the base error is high (and certainly higher than ONT's marketing materials often imply), the platform still works well for a number of applications.

It's also worth noting that anecdotally, others have mentioned that they've seen the MinION giving better accuracy than the PromethION. We've also seen this. So that's something to consider depending on your application.