Triggered and tempted while reading an article, I decided to pen down what chromatin states are. Probably this might help others down the lane who just have started understanding the nuances of Chip-Seq Data analysis.

Talking at a much broader scale, we are taught that the Chromatin is classified into two types or states, Heterochromatin and Euchromatin. However, that's a much traditional classification. When researchers started looking at the Histone (Octate) proteins around which our ~150 bp of DNA was wrapped, they realized they are much more complex than they thought and there are many modifications (Histone Modifications) that occur on the tails that affect the tight/ loose packaging of the DNA content.

The acetylation and Methylation modifications can occur at different positions on the tails resulting in a different biological outcome. Amino acids on histones' tail-like extensions can be singly methylated, dimethylated, trimethylated, acetylated, phosphorylated, ubiquitinated, or otherwise modified and each modification has different biological relevance. For example, H3K27AC (Acetylation on 27th Lysine residue present on H3 Histone tail), H3K4me1 – Promotes Transcription whereas H3K27me3- Shut down the transcription. More than 100 distinct histone modifications have been described along with their biological relevance thus far.

However, there were some questions: Was there any pattern in these modifications that was followed across the entire genome of an organism; does a combination of these modifications occur in one genomic region (say promoter) and was absent in the other (say intergenic regions).

Some researchers proposed Histone code hypothesis according to which a specific combination of chromatin modifications would encode for distinct biological functions. However, others propounded that individual epigenetic marks act in additive ways and the multiple modifications simply contribute to stability and robustness (For reference see).

To find answers to the above questions of whether the epigenetic modifications create patterns and make any sense and do they these found patterns correlate with different functional elements in the genome people came up with the concept of Chromosome state. I started with this paper which states that an I quote

Traditionally, chromatin was divided into heterochromatin and euchromatin. There is now ample evidence that a finer classification is required. For example, in Drosophila, at least two types of heterochromatin exist that have distinct regulatory functions and consist of different proteins. The first type is marked by Polycomb group (PcG) proteins and methylation of lysine 27 of histone H3 (H3K27). PcG chromatin forms large continuous domains; it is a repressive type of chromatin that primarily regulates genes with developmental functions (Sparmann and van Lohuizen, 2006). The second type is marked by heterochromatin protein 1 (HP1) and several associated proteins, combined with methylation of H3K9. This type of heterochromatin can also cover large genomic segments, particularly around centromeres. Reporter genes integrated in or near HP1 heterochromatin tend to be repressed, but paradoxically, many genes that are naturally bound by HP1 are transcriptionally active (Hediger and Gasser, 2006). Direct comparison of genome-wide binding maps indicates that PcG and HP1 heterochromatin are nonoverlapping (de Wit et al., 2007). HP1 and PcG chromatin illustrate two important principles of chromatin organization: each type is marked by unique combinations of proteins and can cover long stretches of DNA. But are there other major types of chromatin that follow these same principles? For example, is euchromatin also organized into domains with distinct protein compositions? Are there additional types of repressive chromatin that have remained unnoticed? 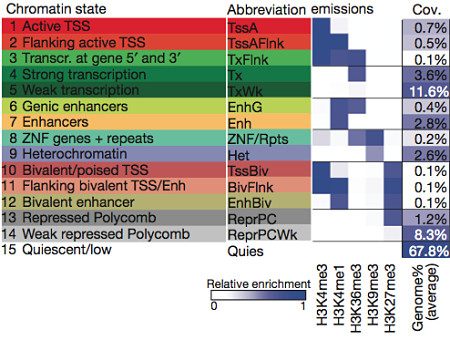 The scheme above indicates the addition of a methyl group (me) to a specific lysine residue (K) of histone H3, a key component of the nucleosome that undergoes various post-translation modifications.

For details on what were the patterns that were found read blog written by Dan Koboldt here.

To learn about how to do Chromatin State analysis watch this video.

Suggestions and corrections from the community are most welcome.