Hello all. I'm REALLY trying to get DEG analysis done for my PI with essentially no experience and no guidance. I'm using Galaxy and attempting to assemble the fastq files received via sequencing and am getting very strange results. FastQC shows very odd GC%: 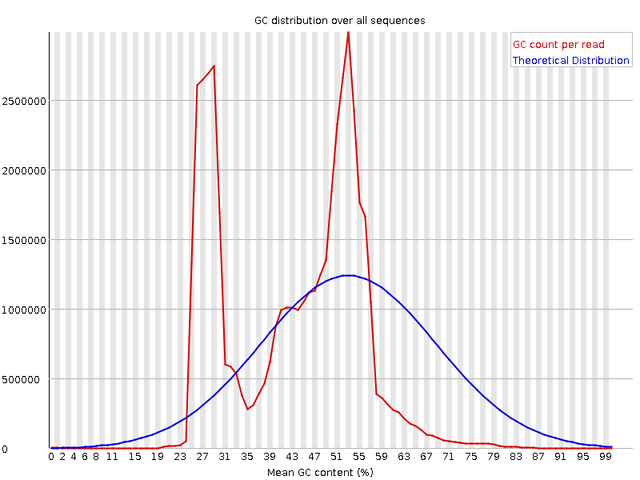 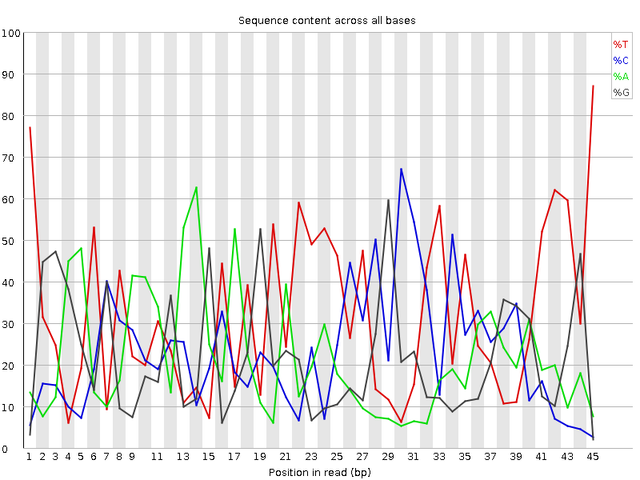 The raw read file itself looks odd to me please see: 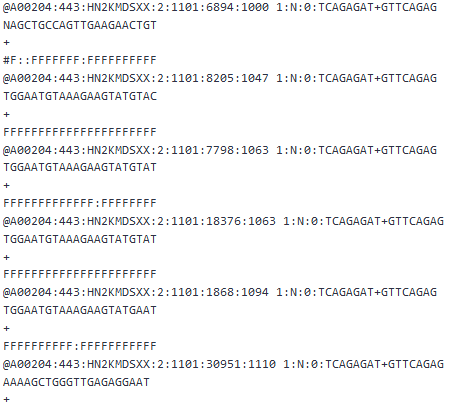 The major thing I notice is the same small sequence following by a + and then the unique sequence directly after. I do not see this in other sets of files that seem to be working very well. I've searched google with every combination of search terms that I can think of to understand what this is and how to solve it. I will be GREATLY appreciative to anyone who can help me, as I have a lot of pressure to get this done without any help. Thank you very much.

Indeed, these data were small RNA seq specific data. My PI is in the process of getting the correct sequence files, which will hopefully pan out nicely for us. Thanks to everyone for your help! same small sequence following by a + and then the unique sequence directly after.

This is probably miRNA, not RNAseq. For example, googling one of the sequences from the picture, it returned the paper Effect of microRNA-1 on hepatocellular carcinoma tumor endothelial cells. This also explains the strange GC content plots: probably, you have two different miRNAs very highly expressed, and they contain different %GC.

These reads are too short, you want to map them t a reference genome, not assemble them.

My mistake! I am attempting to map to a reference via HISAT2 and/or STAR...for now I've just attempted HISAT2 to the reference mouse genome. Following this, I used htseq-count to get the read counts for each identified gene/transcript. This worked perfectly fine on the dataset I pulled from SRA (not our dataset, which was given to me by my PI).

I think you're correct that his is miRNA reads and not the RNAseq. It makes a lot of sense, because I followed through with the downstream steps (mapping, counts, annotating) and when I searched most of the Ensemble IDs, they were miRNA. There were some protein coding genes found, though. I'll ask him to be sure he sent me the correct files. Thanks for your help.

That fastq file looks fine if you only wanted to reads 20 bases. Those QC images look normal if what you have is a whole lot of a few sequences over and over again.

I'm pretty sure it's not RNA sequence. I'd say its index sequence, except that it doesn't match the index indicated in the name line of the reads.

Lol, I really wish I understood what you mean. Should I contact the sequencing company for clarification on what these files actually are? The other set of files I'm comparing these to, I downloaded from SRA and they work perfectly when I run them through my Galaxy workflow...I'm not exactly sure why our files are so odd.

You should contact you PI and ask him the experiment details, the sequencing seems fine.