In the process of analyzing ChIP-Seq replicates with DiffBind (drosophila data, 3 replicates for each sample, choosing DESeq2 as the analysis method), peaks with very small Fold-change were found to be significant.

All points with even slight log fold changes are significant. I wonder, why could this be the case?

For example, the peak which has the smallest fold change, and is still significant is (Fold and Conc are in log2 scale here):

Had these been the results with genes in RNA-Seq, I'd be surprised. Is it merely the fact that the ChIP-Seq has much less "genes" to make a multiple hypothesis correction for? Could it be something else?

If nobody answers, you may consider the Bioconductor Support forum, where the DiffBind developer regularly checks for questions: https://support.bioconductor.org/

Small fold changes can become statistically significant if dispersion is low enough and counts are high enough. That is not uncommon. I personally use glmTreat within the edgeR QL framework to test against a minimum fold change (default is 0) of e.g. log2(1.25), or higher, depending on the assay. That ensures that significant genes/regions have statistical support for a fold change that is not zero but greater than this value you chose. I doubt that these tiny fold changes you see are indeed biologically meeaningful. Not sure whether DiffBind implements that. By the way, I would suggest to reduce ylimits if you present a plot like this, it is probably not too informative if most data points are squished close to the center of the plot, e.g. try c(-4,4) or so.

DESeq2 has a lfc argument in results() and lfcShrink() that allows testing against a fold change. Again, not sure whether DiffBind has that implemented. If not I guess that would be a good feature request. Can you show a plot with updated ylimits, it looks unexpectedly "clean" to the left of the plot, so not much of the expected large FCs to the left. is this shrunken?

Is it possible simply to filter for those peaks where the fold change > 2?

Possible yes, but it flavours genes/regions on the left of the MA-plot. Look at this plot: 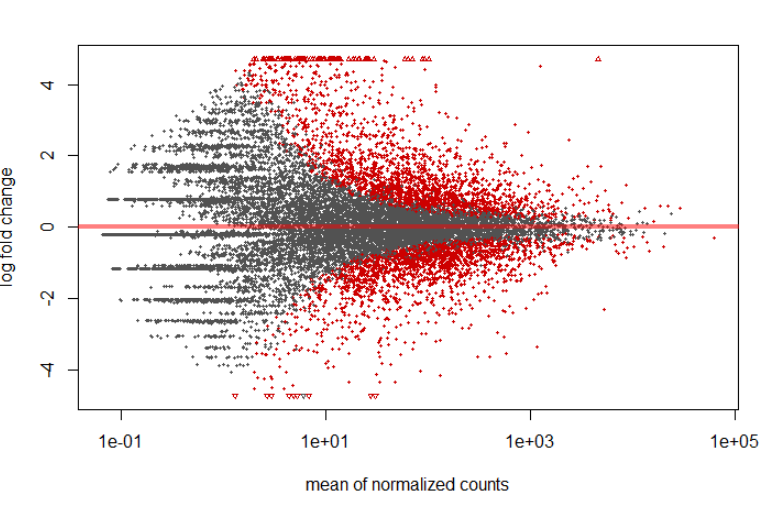 If you filter by a fold change threshold then you start to remove the genes/regions on the right first, and those on the left inevitably are flavoured. The ones on the left have on average fewer counts and therefore lower statistical power, plus fold change estimates are more uncertain. I am not sure of how strong this bias would manifest effectively, but the statisticians recommend to use dedicated testing so genes on the left and right get evenly removed if you start testing against FC threshold. Not sure how it is with shrunken values, I can only say that I prefer not to do manual filtering but simply test against a small minimal fold change.

Sure, but those sort of ad hoc filtering approaches tend to destroy FDR control and favor highly variable, lowly expressed genes. Not that that stops it from being a very commonly used method.

Looking at the counts posted above, it does seem that the dispersion is low. (S1-3 are one group, and S7-9 are another). So I think that the statistical significance is explained; sorry for the bother. Your points about biological significance still hold.

From Version 3.3.2 onwards, DiffBind will recompute the statistics if you specify a fold threshold in dba.report(), dba.plotMA(), or dba.plotVolcano().

For edgeR analysis, it uses edgeR::glmTreat() (instead of edgeR::glmQLFTest()), while for DESeq2 analysis, the lfcThreshold parameter is passed to DESeq2::results() (then re-calculating the fold changes).