Deletions are missed from consensus sequence even when they are predominant. Is this common to vcf2fq of vcfutils?
0
0
Entering edit mode

After alignment of reads and conversion to BAM I can visualize the existence of a 9-base deletion.

This deletion region is also called correctly by mpileup and bcftools

In consensus sequence this portion is:

In the vcf file I do see these indel mutations with more mutant reads than non-indels.

167+29 = 196 reads out of 224 total show the deletion. Other deletion overlaps except one base at either end, with a similar dominant proportion. 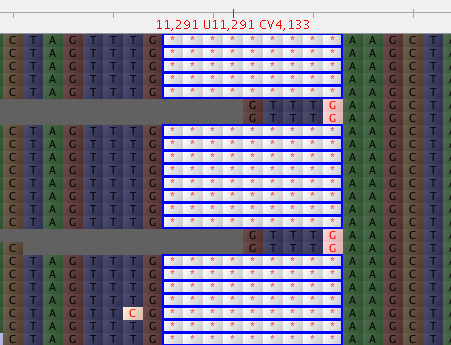 Is there a way I can generate consensus with the deleted portion removed (or filled in with ---------) instead of nucleotides from the minority reads?

I have an alternative python script to count bases at each position and call consensus, but it does not have the statistics as samtools/bcftools/vcfutils.