I'm pretty new on the genomic and transcriptomic world, so any kind of help is much appreciated. My problem in a nutshell is that I can't use featureCounts with the GBFF file provided in NCBI for Periplaneta americana. I've tried to convert the GBFF file to GFF and GTF but always get error. I can align transcripts to FASTA genome, and generate BAM and SAM files but that's all. Any idea if the GBFF file is corrupt or what I'm doing wrong? Here below a more detailed explanation of the problem and command lines I'm using.

I'm trying to do a differential expression analysis from RNAseq samples of cockroach Periplaneta americana. I did it before using a de novo transcriptome with Salmon without problems. Nevertheless, I'd like to do the same analysis using the genome of this species (available here, Li et al 2018).

I can align transcripts and generate SAM and BAM files using the genome (FASTA format, I downloaded here and I merged all bits together) with hisat2 and samtools following this tutorial (more or less):

example for a given sample.

Nevertheless, I get stack after this step. I cannot use featureCounts or anything to generate counts. I tried to download the GTF file using NCBI Assembly (here), which downloads some json and jsonl files but no GTF file. So the only option is to convert the GBFF file they provide to GFF. I did it with bp-genbank2gff3.pl, and the resulting file looks a bit weird (see image below). I also tried the conversion from this GFF to GTF file using gffread but gives an empty output file. 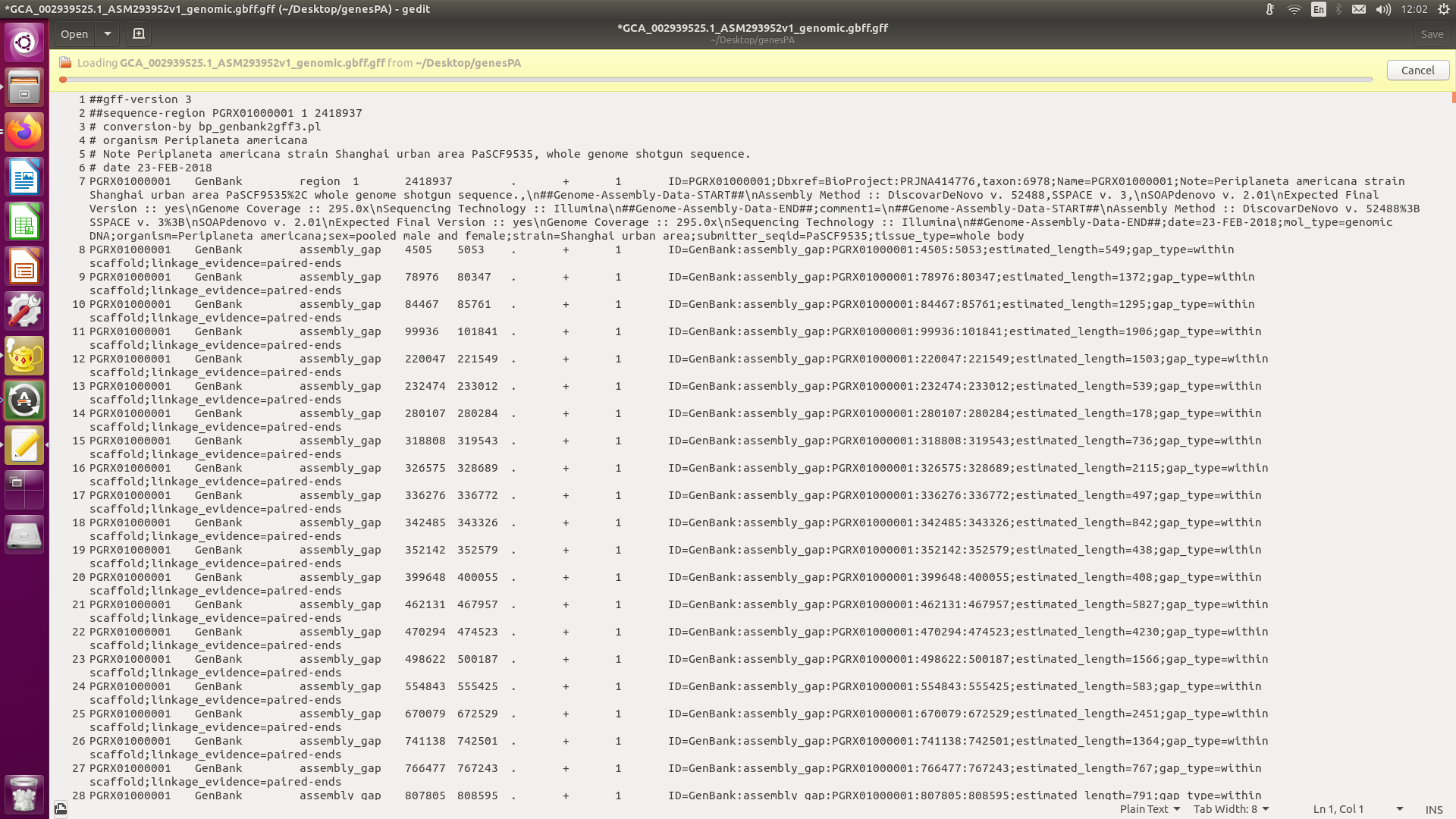 I used this command line to generate a GFF file that looks 'better' but it also gives empty output file when converting to GTF. 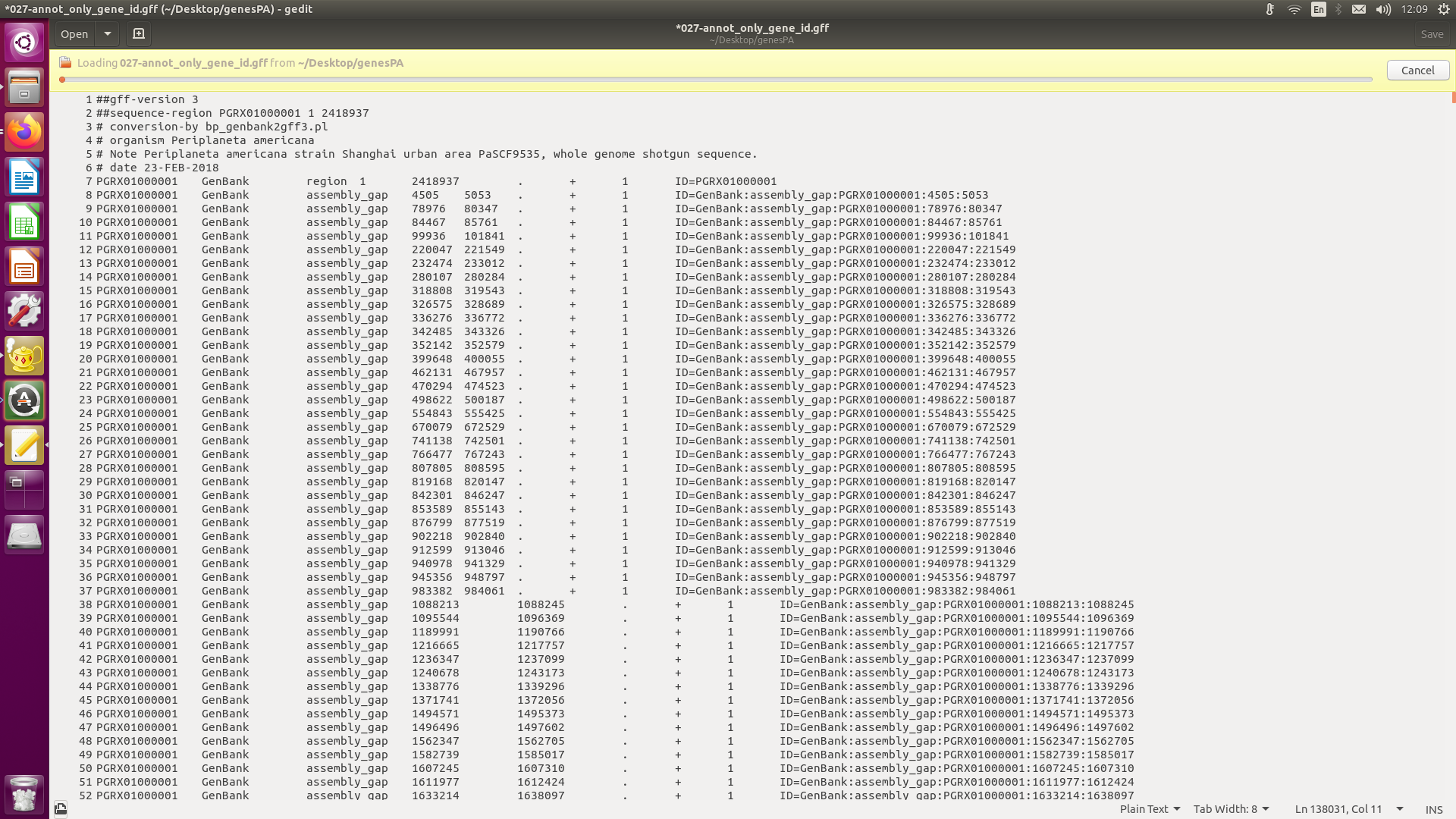 I've tried to run featureCounts with both GFF files but I always get this error:

Any idea of what I'm doing wrong? Is it even possible to do this analysis with the GBFF file provided or is there some format problem? I can provide a BAM/SAM file or any other file if they can help by email (sorry, they might be too heavy to upload them here).

This is not working because you likely have no gene annotations in your GBFF file. These are simply notifications of gaps in genome. Do you know if the gene models for this organism are done? Without gene, exon designations in the third column of a GFF/GTF file no counting program is going to work.

Hi, I was afraid there would be some problem like this. I don't think there's any gene model for this species (I was looking for it now, and nothing came up). Authors that published the genome did a general blast and compared to other insect species genomes, but there are no official annotations.

Actually, I have a question, which may seem a bit silly. If in my analysis with the transcriptome we provide start-end-length of transcript, sequence and annotation, can this be considered a gene model? I guess not, because it's the transcriptome and not the genome, so we cannot provide a proper exon... is it?

Within the limits of your transcriptome assembly those can be considered expressed transcripts. You will need to map them back on to the chromosomal assembly and see if you can locate the exon boundaries. This can then be followed up by creating a GTF file with gene models for reference assembly. As you can imagine this would be a lot of work.

If you are happy with your salmon results then just go with that.

That was very helpful, thanks a lot!