I have a problem how to tackle my recent imaging task. I have about > 100 fluorescence images with 2 signals looking like this: 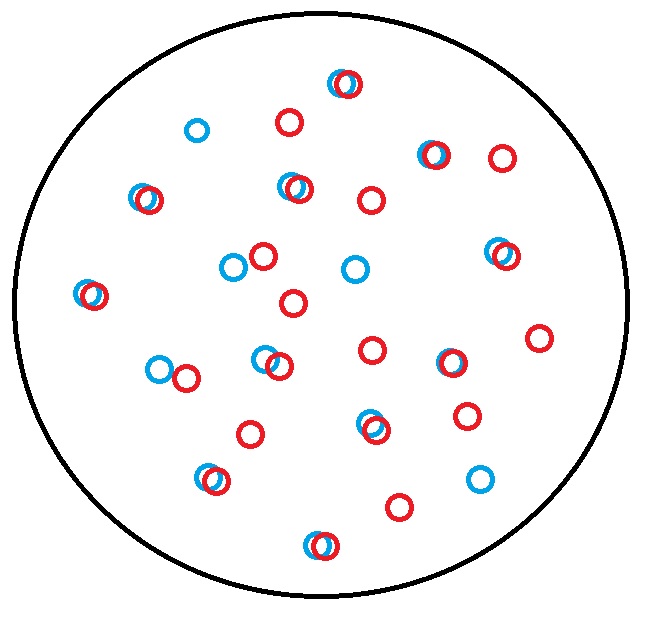 I wrote a programm which extracts the x- und y-position of every red and blue signal und now I want to check if there is some kind of colocalization. Does anyone has an idea how to do this? I searched for lots of papers and programs but they use pixel intensity and not x/y-coordinates for calculation. How do I visualize colocalization (i.e. which kind of diagram/ graph...)? I would be glad for every answer!

Thanks Mensur Dlakic for your fast answer! The concept is really easy! But how do I implement it in Python or R? Do you have any example or a paper I can refer to? I really need some example to understand it...

I don't know what else you need beyond what I have written already. If you have x,y coordinates and a radius R for each circle, it is a simple loop where you go through the whole list and compare each circle to all others using the formula I wrote above.

If you want a more sophisticated solution, see here.

Thank again Mensur Dlakic!! But my question is, what comes after this? Because in the end I identified that a certain percentage of blue signal is near to the red signal. But how can I do statstics with this information? So showing that the colocalization is statsistically significant... That's the problem I am thinking about all the time!

This is what you asked originally:

now I want to check if there is some kind of colocalization.

I think I answered that question.

What you are asking now is something completely different, and I don't think it has a simple answer. Still, you can use some of the same logic I explained above, and apply couple of thresholds. For example, let's say for the argument's sake that the two circles overlapping by >50% of their areas are considered to co-localize. That can be used as a first threshold to decide whether the two independent signal areas are co-localized. Next, you may want to have a second threshold where a certain fraction of signals need to be co-localized to consider the whole group co-localized. For example, let's say that you have 30 red and 30 blue circles, and that 20 of each are overlapped by >50% of their areas. That would mean requiring 2/3 of all signals of one color to overlap with a different color signal by at least 50%. The last threshold would be fraction of cells with this signal overlap, and that I would set really high, say >80%. You may want to apply different thresholds than 50% and 66.7% but that is a general idea.

Keep in mind that cells are 3-dimensional and your images are 2D (unless you have confocal capabilities). Therefore, two signals that are exactly above or below one another but not in the same 3D spot would still look like they overlap in 2D. If the two signals are distributed uniformly throughout the cell, you would probably need different thresholds than what I listed above. As yet another example, if the signal is say nucleolar (which is one or two dots inside the nucleus), I would like to see 100% of dots overlap in >90% of cells before concluding that they are co-localized.

I don't know of a simple answer that fits all scenarios.