How should I deal with my RNAseq result with high % of mutiple aligned reads?
1
0
Entering edit mode 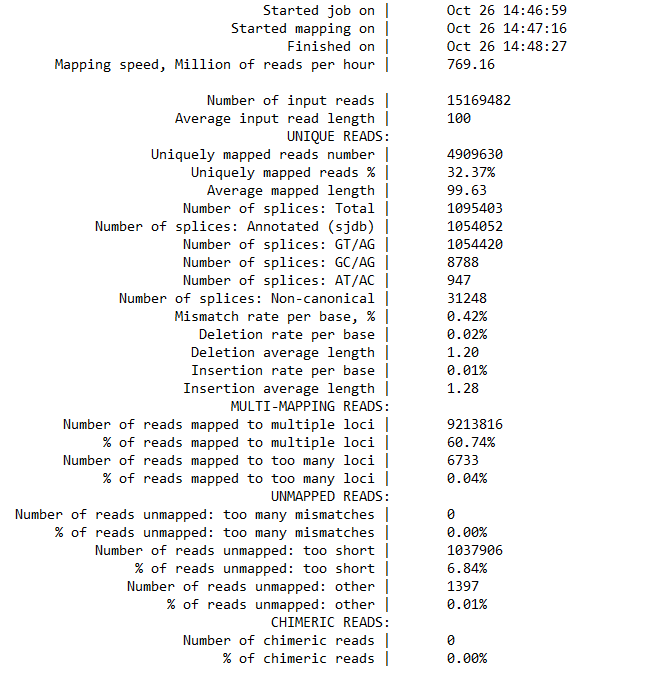 Here is one of my result from STAR alignment. As you could see, Uniquely mapped reads: 32.37% and % of reads mapped to multiple loci: 60.74% This sounds not that bad because more than 90% of my reads were aligned well. However, when I process bam file with featureCounts, Successfully assigned alignments rate is 10.1%

Here are more details about commands and program that I used.

Q2) How should I deal with high % of reads mapped to multiple loci? According to featureCounts manual,

So if I use -M option then one read may counted more than once? What should I do about it?

The dataset looks like it's total RNA so those reads are probably rRNA... why don't you check where the multi-mappers are aligning to the genome? If so then I would just proceed with unique mappers.

Alignment of reads mapping to multiple loci create multiple bam entries (for the same read). In consequence, the proportion of uniquely mapped reads can not be compared with the proportion of successfully assigned alignment as it is not the same denominator. In your case, 60% of multi-mapping reads will account for a minimum of 80% of your alignments (more than that if they align more than twice). In consequence, it is possible that the majority of your 30% uniquely mapped reads are found in your 10% of successfully assigned alignments.