Hi, I am not an expert in Windows and Linux OS.

I would like to try to install AGAT on my computer. The OS is a Windows7 (64 bit installation) and I have ANACONDA Navigator 1.10.0

I have referred to the installation guide for AGAT. (https://github.com/NBISweden/AGAT#install-prerequisites)

To install the software I have opened the ANACONDA Navigator dashboard and I have selected the POWERSHELL PROMPT from which I have launched the commands. 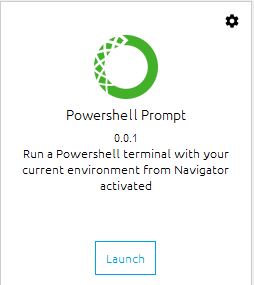 I have chosen to install the program using BIOCONDA and this is the command:

The output is this:

UnsatisfiableError: The following specifications were found to be incompatible with each other:

I have to say that I tried also other methods like the "Old school - Manually" section suggested in AGAT installation guide. From the result, it seems that some Perl modules are not found and I cannot fetch them from the channels. However, I would like to pose a question about Bioconda first and understand where I am wrong or what I did not consider checking the prerequisites for AGAT.

Thanks for your help.

You might consider to use Docker or Singularity to avoid those problems.
I don't know if it is possible to with POWERSHELL PROMPT but you can try to clone the repo and run:

Yes Juke I have tried this method but does not work. If I create the environment through the .yml it seems that works. Indeed, the command:

I have downloaded manually the AGAT folder instead of to clone the folder. When I go into this folder and try to check for the dependencies this is the result:

I think that the main problem is that I am trying to install AGAT on a Windows platform. I do not have a Linux partition on this laptop but I think that I need to switch to Linux if I want to avoid such kinds of issues.

Yes for bioinformatics you better to use Unix platforms. But I thought agat installation would work smoothly for AGAT. I'm not a windows person, so I cannot really help...