An interpretation of an SV
0
1
Entering edit mode

all these tracks are from the same human sample. There is a duplication called by Manta followed by a deletion called by a read-depth method. But the duplication actually have a copy-number of 2. So, it looks like, a large deletion happened first, then some sort of duplication (we see the signature of "green" paired reads there) which affected a part of deleted region (and thus it became a copy-number 2 again).

Did anyone see such "copy-number neutral duplication sharing a breakpoint with a deletion" thing? How could it be interpreted? How could it arose? 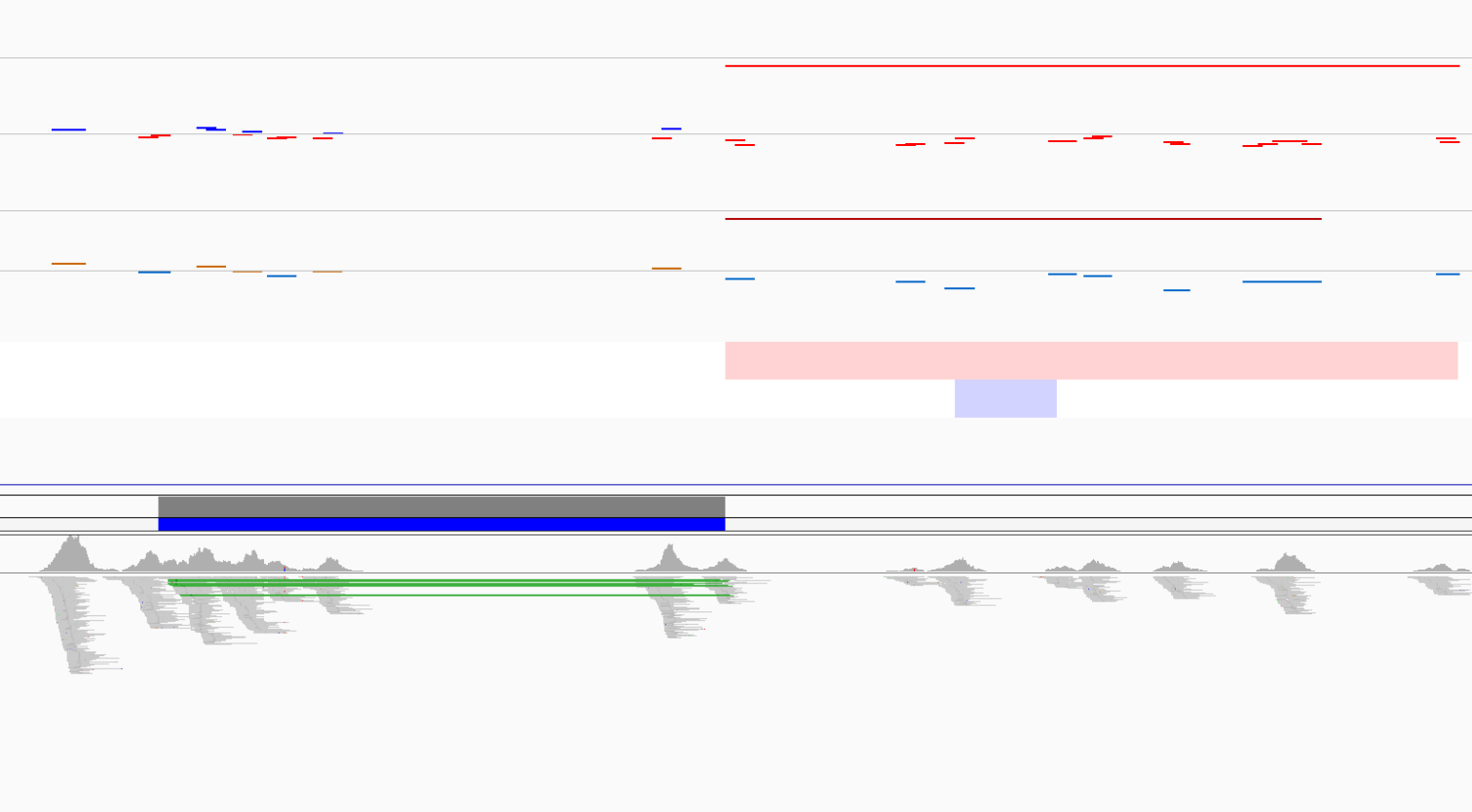 This is all Illumina data I'm guessing? WES? What coverage do you have? Also what are the scales of the deletions/duplications? Chromosome-arm length or a few hundred base pairs? Is this a germline human sample or somatic?

I've not personally seen something like this before but I suppose it could be possible if one parental haplotype had a deletion and the other a duplication? Are you able to phase the reads at all to see whether the duplication and deletion occur on the same allele?

I'm not sure I'm fully understanding your question so let me know if there's something I'm missing.

Germline, each segment on the top is one exon. Yeap, deletion and duplication could be an explanation, but it is absolutely improbable. Two variants on two alleles simultaneously - no way...

I've seen such variants maybe 3 times per 10K rare disease samples, so it should be some particular SV, maybe already well studied, but I've not seen this described...

I agree that it would be improbable, but may not hurt to check the phasing. I'm confused by your proposed explanation though: "a large deletion happened first, then some sort of duplication". If we assume that both events are on the same allele, wouldn't it have to be a duplication followed by a large deletion? Otherwise, if the deletion occurred first, there would be nothing to duplicate (if I'm understanding correctly that you're suggesting that the entire length of the duplication was affected by the deletion to make the region copy number 2).

Would be interesting to see parental data for this sample. Maybe a parent had a duplication but there was a de novo deletion in the proband? If the region is a hotspot for NAHR, something like this could be a potential explanation: https://www.ncbi.nlm.nih.gov/pmc/articles/PMC2669897, though if I understand the mechanism correctly, the region would first have to be duplicated in the father. I'm not an expert in variant interpretation by any means though so this could be completely off-base.

Has the affected gene showed up in any searches of relevant databases?