The DESeq2 method consists of using RUVSeq to first remove unwanted technical variation (without doing betweenLaneNormalization) and then DESeq is used with the controlGene parameter specified as the ERCC spike-in. Hopefully, this is what I should be doing. The result returned is what I expected.

However, the edgeR limma+voom padj values seems strange. My normalization technique followed the steps below:

The lowest padj values look as such:

where the lowest padj are all identical and "nearly" significant. The pvalue histogram is as such: 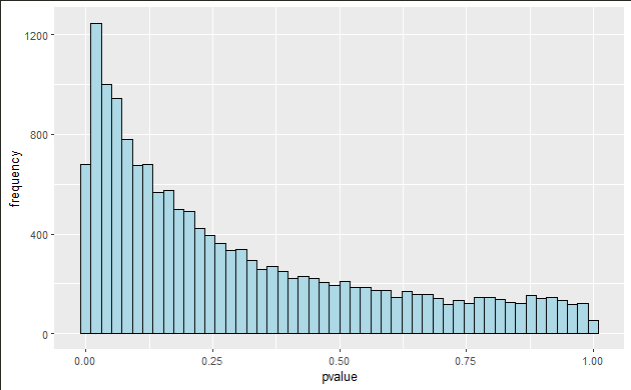 I've never seen pvalues act this way so I'm not sure that it's normal. Is there a reason to explain why these values are all somewhat close to 0, as well as they are nearly all the same value. The most significant transcripts from edgeR limma+voom do correspond with those that came up using DESeq2, so I believe that it might just be due to a difference in techniques.

I think that is commonly observed in calculating p-adj (BH) values. For more details, visit this link: https://stats.stackexchange.com/questions/476658/r-why-are-my-fgsea-adjusted-p-values-all-the-same

In situations like this one needs to be able to explain to themselves what the "expected" distributions should look like, then evaluate the observed p-values accordingly.

If the effect that you attempted to compute a p-value of is not present then the p-values ought to be all uniform from 0 to 1 representing the overall variability in the process.

If the effect that you compute the p-value of is present then there should be a big increase around 0, showing you that the frequency of the "valid" observation exceeds the background preferably many times over.

The adjusted p-values you have there are likely FDR values, and those have a different interpretation than traditional p-values even though are called the same. I would not get too hung up over that, various normalization factors may be applied that, in turn could wipe out smaller level variation.