mRNA sequencing (RNA-seq) is a powerful tool that uses next-generation sequencing technologies to examine a cell's transcriptome profile. This technology has a wide range of applications, from discovering novel transcripts and alternative splicing to analysing the transcriptome of samples in response to internal and external environmental changes. RNA-seq is also used to identify developmental mechanisms and drug resistance by examining which genes encoded in DNA are turned on or off at a given time.

To more accurately verify the reliability of transcriptome data, a highly recommended study strategy would be first use transcriptome sequencing data to discover the differential expression levels of critical genes and their function enrichment, and then use qRT-PCR to target specific gene quantification, as well as the Western Blot, and other technologies to verify the expression level and translation level of a single gene respectively. If the gene has the same trend as the transcriptome results at the transcriptional level and translational level, the reliability of the data can be confirmed. This way, the fundamental research will realize the experimental closed loop from the appearance of the gene and from the gene to the protein and effectively explain the biological mechanism.

We can also see similar research ideas in these two recently published studies; both apply tiny samples to identify the important mechanism of genes in different pathways after chemical treatment.

Using RNA-seq to investigate the effects of chemical exposure

These two recent studies demonstrate how RNA-seq can be used to examine external environmental changes' effect on the transcriptome profile. Both studies used RNA-seq to investigate how chemical exposure could impact developmental processes. The first study by Zhang et al. (2022) explored the neurotoxic impacts that bisphenol A (BPA) has on the hippocampus of male mice (F1 generation) by using only 12 samples. BPA is a chemical that is used in the manufacture of plastics and resins. This chemical can migrate in small amounts to food and beverages stored in plastic containers made utilizing the substance. To understand the neurotoxic impacts this chemical can have, the researchers exposed the mice to one of four experimental conditions: 0 mg/L BPA, control group (C); 0.01 mg/L, low dose (L); 0.1 mg/L, medium dose (M); and 1 mg/L, high dose (H). Following this, RNA was extracted from the hippocampus, and cDNA libraries were constructed. Novogene performed library construction, quality inspection, clustering, and sequencing. The sequencing data were then examined to identify any differentially expressed genes. Genes were identified as being differentially expressed if the P-value <0.05. RT-PCR was carried out on nine genes related to mitochondrial oxidative phosphorylation to confirm the results obtained by transcriptome sequencing. Researchers also used western blotting to ensure the expression level of Ndufb10 protein. 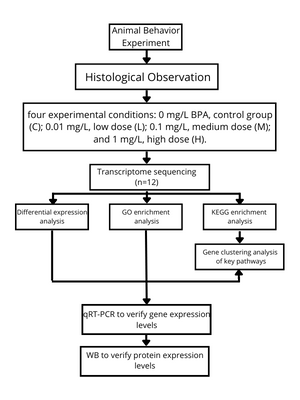 Similarly, the second study by Hu et al. (2022) used RNA-seq to understand the impact of the chemical florfenicol (FLO) on development. Florfenicol is widely used in veterinary clinics and aquaculture settings yet have negatively impacted embryonic development. The researchers used P19 stem cells as a model to examine the effects that florfenicol has on pluripotency, proliferation, and differentiation. The cells were exposed to environmentally relevant levels of FLO ((1.56–25 μg/ml)), and RNA-seq was carried out to identify differentially expressed genes, and only 6 samples in total were selected. Novogene carried out the whole process of RNA sequencing with 150 bp paired-end reads, and all low-quality data was removed to generate clean reads. The paired-end clean reads were aligned to the reference genome, and DEGs were identified. Genes were considered differentially expressed if the adjusted p-value <0.05 and |log2 (foldchange)| > 0.585. Following sequencing, the researchers also used western blotting, bioinformatics, and functional analyses to identify the possible pathways affected by FLO exposure. 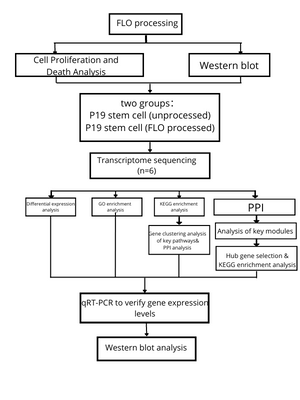 What can we learn from the RNA-seq data?

The results from both studies demonstrate how RNA-seq can be used in conjunction with their techniques to provide novel information on the adverse effects of chemical exposure on development. RNA-seq results showed that BPA exposure inhibited gene expression of target genes involved in mitochondrial oxidative phosphorylation. These results were confirmed by RT-qPCR and western blotting and demonstrate how BPA exposure led to a reduction in the protein expression level of Ndufb10, which is involved in processes related to learning ability. In addition, the researchers also noted reduced activity of several complex proteins, including complex I, III, IV, and V, correlated with abnormal ATP synthesis and a reduced energy supply in the brain. These results provide a further understanding of BPA-induced neurotoxicity.

In the second study, exposure to FLO prevented P19 stem cells from proliferating and hurt pluripotency. RNA-seq data identified 2,396 DEGs in FLO-treated P19 stem cells. Most of these genes are involved in several important biological processes, including angiogenesis, embryonic organ development, and organ morphogenesis. The data also demonstrated that FLO disrupted signal transduction pathways, including the canonical Wnt pathway, preventing the expression of several target genes involved in regulating processes such as DNA replication, cell cycle, and pluripotency. This was confirmed by using western blotting to examine the protein expression levels of β-catenin, which is the key switch in the canonical Wnt pathway. They found that exposure to FLO reduced the amount of protein being expressed, confirming the results obtained by RNA-seq.

The use of NGS technologies in these studies enabled the researchers to explore the transcriptome profile of their samples in response to chemical exposure. RNA-seq is a powerful tool that, unlike more traditional techniques, allows us to see everything going on in a cell concerning gene expression at a given time. Combined with other methods, it opens up endless opportunities to understand biological processes in more detail.