I'm studying the effects of chemicals on plants with a focus on potential disturbances in the process of splicing. Therefore, I treated my plants with said chemicals and extracted RNA after several time-points.

After the wet-lab procedures I sequenced the mRNA using Illumina NextSeq with 150 bp, 20 x 10⁶ reads per sample in paried-end mode ("only" 20 x 10⁶ reads as this first trial is somewhat a proof of concept).

After trimming the reads with Trim Galore 0.6.4 and aligning them to the genome of Arabidopsis using STAR aligner 2.7.1a, I'm now searching for a way of detecting reads on genes indicating miss-spliced mRNA.

So far I've tried to do this with rMATS v3.1.0, but couldn't find real defects in splicing. The results I'm getting with this approach are mainly shifts in the presence of several iso-forms of mRNA but nothing which is not already annotated in the corresponding gtf-File.

Nevertheless, there are such events, as I've included a known inhibitor of the spliceosome, which also yields miss-spliced reads ( if checking the BAM-files in the IGV-viewer). But again, those events are not detected by rMATS.

Does anyone know a tool for my purposes or can give me advice on how to detect those events with rMATS?

I've attached a representative picture from IGV-viewer, showing the control (untreated// mock-treated) as well as two samples which were treated with inhibitors. I've also run cufflinks on the BAM files to generate gtf files for the present transcripst, showing there are intron containing transcripts. 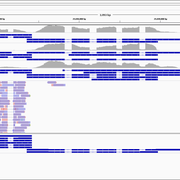