I have downloaded raw data from GSE118959. The platform used for this study was '074301 Arraystar Human CircRNA microarray V2 -- Agilent Technologies'.

In terms of Agilent circRNA microarray data, firstly, does anyone know if biomaRt has the annotations? Heres whats available when searching "Agilent" in mart atributes: 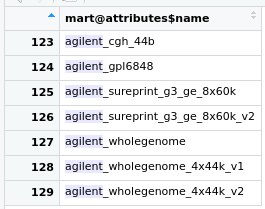 My second attempt was to look at the list of circRNAs provided by the GEO study which looks like this:

My main confusion comes from the fact that:

1) there are 9757 probeIDs in this file, yet roughly 15600 lines in the raw microarray file. Are there multiple duplicates/controls?

2) the 'Alias' column has plenty of missing values, which is irritating considering the names used in 'Alias' are in other circRNA databases - using these databases to annotate would result in numerous annotations.

Does anyone have experience in annotating these circRNA probes?

p.s here is an example of the annotation I am looking for. I downloaded supplementary info of a paper:

Looks like a study from Trinity? There is a more appreciable number of probes in the official GEO record for this array, HERE, which I believe covers the ~15000 to which you refer. Many of the ones that you see in the raw files are also going to be control probes.

I don't believe there is annotation for this in biomaRt, as it appears to be a custom array.

The author-provided Excel file probably contains the probes used after filtering. Losing a few thousand probes based on QC is actually common enough in microarray studies.

Yes its from Trinity! Thank you for clarification on the first question. The GEO annotations still only give Probe ID & circRNA. I will use separate annotations from published papers and use the Probe ID as a key. Oh and I'd like to thank you for the numerous tutorials/tips you have posted on here, I have used them countless times!

Sure thing - happy to help out a fellow Irishman!