I am looking for an example of orthologs that have functionally diverged (gain or loss of function(s)) but that retain a part of common functions. Do you know such a case, regardless of the species, supported both by the litterature and by the Gene Ontology annotations of these orthologs?

I think the Holliday Junction Resolvases in mitochondria are an interesting example. They have become transcription elongation factors in the course of evolution of the metazoa and lost one residue essential for their original function. Check the last story in "Loss, replacement and gain of proteins at the origin of the mitochondria (Martijn A. Huynen Isabel Duarte, Radek Szklarczyk)

There are two well known example related to the regulation of galactose metabolism in S.cerevisiae and C.albicans. These cases are well described in the article Martchenko et al, 'Transcriptional rewiring of fungal galactose-metabolism circuitry'. Curr Biol. 2007, and also in Rokas et al Transcriptional Rewiring: The Proof Is in the Eating, Curr. Biol 2007. There is also some description in chapter 3 of the book "The Origins of Evolutionary Innovations" by Andreas Wagner, and in these slides I did for a journal club on the same book. 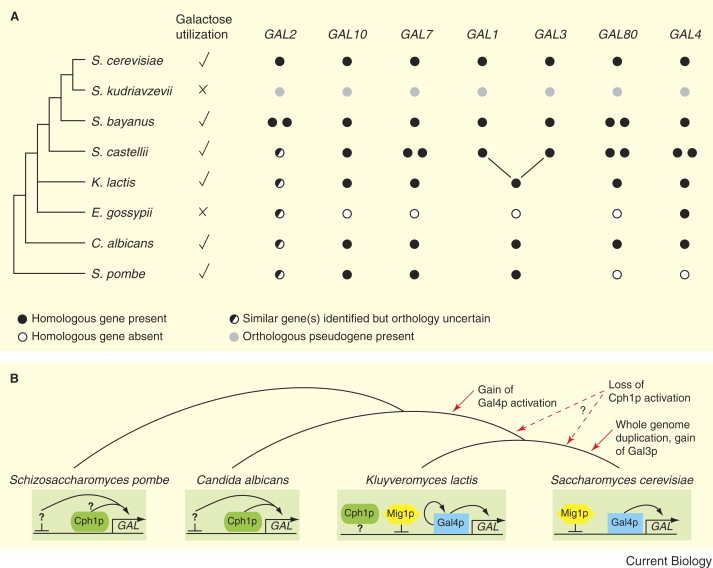 In general, I think that you are looking for homologues that have different function, your best bet is to search among transcription factors. A small mutation in certain positions of the sequence of a transcript factor can have a huge impact on the specificity of the transcription factor, making it recognize a completely different sequence. This leads to a change of function of the transcript factor, while the rest of the sequence remains conserved.

Identifying a retention of part of a common function might be tricky, as "part of common function" isn't something easily captured by Gene Ontology. If you need some examples, there's a plenty of literature on the topic (Iike in particular the work of Marc Robinson-Rechavi, so here's one of his recent papers: http://bib.oxfordjournals.org/content/early/2011/06/16/bib.bbr031.full ). However if you need some large scale data, I would start with "clans" of protein domains in Pfam. Basically they contain related, but functionally diverged protein domains. If you map that onto orthology classification (let's say Kegg Orthology), this would give you several good starting points to start a detailed search from.

I'm not sure that that definition of Clan is entirely correct. Pfam clans are generated using HMM-HMM comparisons (PRC) and they intend to bring together "evolutionarily related families". However, I believe that some Pfam families that have been modelled by different Pfam HMMs and put into the same clan are actually the same family but they cannot be modelled by a single HMM). e.g. Lipocalin (PF00061) and Lipocalin_2 (PF08212) are 2 models both representing lipocalins. If you look in InterPro, these have been placed in the same entry (http://www.ebi.ac.uk/interpro/entry/IPR000566) because you cannot separate them based on information in UniProtKB describing the proteins they match.

I should add - they have the same function so this illustrates why the approach suggested wouldn't work.

You're probably right. My assumption comes from the fact that for all families I was looking at my assertion was correct (I could even construct a single HMM for some Clans). But I didn't explore Pfam Clans extensively.

The review you cited, "When orthologs diverge between human and mouse", is very good and answers completely the question. Thank you.

Rather than Pfam Clans, I suggest you might use the Panther resource. It covers all of the reference genomes as defined by Quest for Orthologs. Not only does it use phylogenetic trees when defining families, it also applies GO terms to them, so I think this is a really good fit.

In their 2011 paper "Phylogenetic-based propagation of functional annotations within the Gene Ontology consortium" there is a very nice example of exactly what you describe, where a family of super oxide dismutases has lost function (to become chaperone proteins) in one of the clades (PTHR10003) - see Figure 5. The paper also describes how different automatic GO annotation methodologies (InterPro2GO, PAINT and Compara2GO) assign terms.

Hope this helps! (Thanks to my team for providing examples :-) )

How about Globins in Archaea and in Human ? Enough to be classified as "orthologs with functional divergence" ?

You can either download(link) all the interactions from this website or just search for the proteins you need. As an example I searched for Hex protein, and the results can be found here in this link.